SAMUEL OKWARAJI DIED ON THIS DAY IN 1989.

Samuel Sofuchukwuma Okwaraji slumped on this day-12 August 1989 while playing for Nigeria in a 2nd round of the Italian World Cup qualifier group C match against Angola. 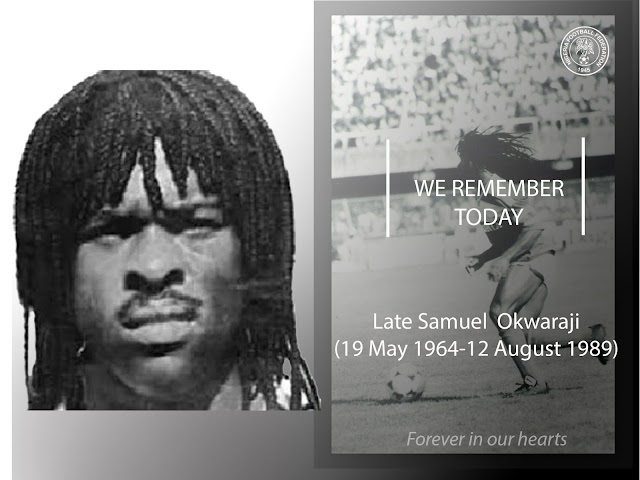 It was on the 77th minute during playing time in the National stadium in Surulere,Lagos that Sam collapsed in front of more than 20,000 Nigerians.Nigeria was thrown into disarray,his body was rushed to the National stadium clinic and from there to the General Hospital where he was pronounced dead.

Thousands of Nigerians who came to the stadium to cheer the Nigerian young prospect into glory left the stadium with a heavy heart.Even the Palancas Negras of Angola abandoned the game and where sympathetic.

At that time,Samuel Okwaraji was just 25 years old.A qualified lawyer,who had a masters in international law from the University of Rome and a professional footballer who represented Nigeria and also played for top clubs like AS Roma,Dinamo Zagreb,Austrja Klagenfurt,VfB Stuttgart,SSV Ulm and Kon.Berchem Sport.

Autopsy revealed that Samuel died from high blood pressure-induced congestive heart failure(which occurs when the heart is unable to provide sufficient pump action to ensure enough blood goes round the body).His heart was discovered to be enlarged.Samuel Sofuchukwuma literally played his heart out for Nigeria.

May his soul find peace beyond!!!