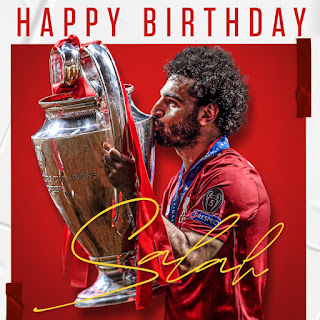 Egyptian born Mohamed Salah Hamed Mahrous Ghaly was born on this day-15 June 1992.Salah plays as a forward for England giants Liverpool.Having helped Liverpool bring back a Champions League trophy to Anfield Road,he is still playing a vital role and close to bringing the English premier league trophy back as well after a very long while.
Having played for Basel from Al Mokawloon when he started his senior career,he moved to Chelsea in 2014,loaned to Fiorentina and then AS Roma where he was officially signed on a permanent deal
After an impressive two years at Roma,he made a return to England to sign for Liverpool.
Salah's epithet is "The Pharaoh" by the press and "Egyptian King" by Liverpool supporters.
🏆🏆Swiss Super League
🏆UEFA Champions League
🏆FIFA Club World cup
🎖UEFA Golden Boy
🎖🎖African Footballer of the Year
🎖🎖Premier League Golden Boot
🎖Premier League player of the Season
Among numerous personal awards.
Happy Birthday MO Salah!!!
Posted by Okafor Collins