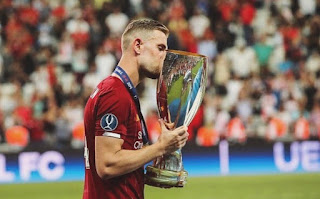 England born Jordan Henderson was born on this day-17 June 1990.The English man who turns 30 today plays as a midfielder for Liverpool.Henderson started his youth and senior career with Sunderland,went on loan to Coventry city before signing for Liverpool in 2011.The Liverpool captain who once captained England also represented England in the U-19,U-20 and the U-21 levels.
Jordan Henderson can play at any midfield positions but is well known for his No.8 role.Furthermore,he is being acknowledged for his leadership both on and out of the pitch.Lead the team to a double club European and a club World trophies last season and is close on lifting the Premier League trophy for Liverpool after a very long while.
🏆Football League Cup
🏆UEFA Champions League
🏆UEFA Super Cup
🏆FIFA Club World cup