Th Legendary goalkeeper Gianluigi Buffon widely known as "Gini" was born on this day-28th January 1978.The Italian born is been considered among the greatest of all time in his position of play.
Gini is among the few players to have recorded 1000+ professional career appearances,holds the longest streak in the Seria A history without conceding a goal(He went unbeaten for over 12 league matches and keeping the most clean sheet during that run-10 in the 2015/16 season).
🏆🏆🏆🏆🏆🏆🏆🏆🏆 Seria A
🏆🏆🏆🏆🏆Coppa Italia
🏆🏆🏆🏆🏆🏆Supercoppa italiana
🏆Seria B
🏆UEFA Cup
🏆French Ligue 1
🏆Trophee des Champions
🏆FIFA World Cup
🏆UEFA European Under-21 championship
🏆Mediterranean Games
Among numerous personal awards.
Happy Birthday to the G.O.A.T🐐🐐
Age 42 and still counting💪💪 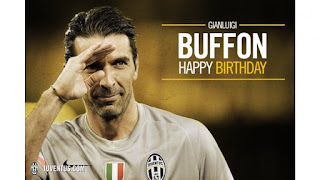